Updates on the situation in relation to COVID-19.

The President is elected by the members of the Society. Elections are held annually, and results are announced at the AGM in September each year. 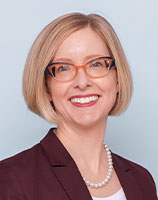 Elizabeth Carroll is the current president of the ACT Law Society. Her election was declared at the Society’s AGM on Thursday 24 September 2020.

Elizabeth is a founding partner in Holding Redlich’s Canberra office. Specialising in public and administrative law, she has led the legal teams of three Commonwealth agencies. First elected to Council in 2017, she was elected Vice President in 2018. She joined the Law Society's Government Law Committee in 2018, and received the Society's Government Law Award in 2016.

With over twenty years’ experience in both government and private practice, Elizabeth is representative of the diverse nature of our local profession, and she is passionate about the role professional associations play in benefitting members and the wider community. From 2015-2019, she was Chair of the Australian Government Legal Network (AGLN), representing over 1,700 Commonwealth government lawyers, and was an AGLN Board member for six years. A strong supporter of the professional development of young lawyers, in 2013 she established the AGLN’s Legal Circles Mentoring Program.

Former Presidents of the Law Society